A Day at the Beach

On Sunday, my New Zealand plant ecology class had a field trip to the beach to study dune ecology.

This map shows the relative location of my lab and my college city, Palmerston North. It's a topographic map, so notice how flat the area around Palmy is, and how far Palmy is from any of New Zealand's renowned mountains.

We were each given a thick packet of papers, in the vans, which was our lab handout. It mostly was comprised of reference maps, dune formation diagrams, and descriptions of native rare plants. My classmates and I read through as much as we could on the ride there, but the professor was not expecting us to read any of it after all. Once we arrived, she instructed us to grab everything we brought because we were going on a long hike and wouldn’t return anytime soon. A minute into the hike, we were able to see the active nature of a dune ecosystem when we came across a section of the road that had recently been covered by sand.

Those trees in the background are Pinus radiata, known colloquially as Monterey pines. They are clones that were planted here for timber, and have since become a weedy pest. They disrupt the ecology of this dune area and prevent native flora from establishing under their canopy. This is only one example of a plethora of problematic exotic species inhabiting the reserve. Being in New Zealand and hearing about how an American pine tree is detrimental is a new perspective, especially after visiting Monterey, California, where these conifers are celebrated.

My professor, Jill, is a short, round, energetic woman who always has a hilarious running commentary. She knows heaps about the botany of New Zealand, and scientific names bubble out of her mouth like foam from a shook-up soda bottle. Here’s a picture of her describing a plant with modified photosynthetic leaves instead of stems (the plant is located behind her):

This is an example of one of her many expressions that sporadically appear during her lectures. Usually, they are accompanied by her disappointment in a plant's evolutionary strategy. 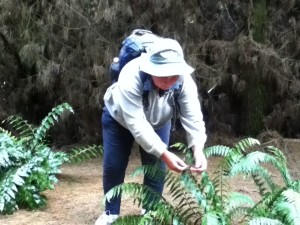 Jill shows us the differences between some ferns in the exotic Monterey pine forest. These specimens happen to be spleenworts.

The dunes are a mix of wetland, wind-blown wasteland, and typical grass covered sand hills. The two grasses covering the hill-sides have different strategies, which either promotes dune formation and stabilization or causes a dune to become very tall before collapsing. This can be very important when planting these grasses next to a house. Tons of sand collapsing on a house is generally bad for its re-sale value.

In the foreground is a wetland, in the middle of the photo is the wasteland, and at the end is the dispicable and frustrating Monterey pine plantation.

We stopped fairly often as we hiked to look at another plant, to search for a plant, or to sit and chat about our observations. At one point we sat for a snack break and Jill passed around “lolly cake,” which is a sweet treat made with marshmallows, coconut, dried fruit, and tons of sugar. So far, hers is the only kind I like. I think my teeth rotted when I ate it. (a recipe for those who are curious: http://www.foodlovers.co.nz/recipes/lolly-cake.html)

Here we are sitting in a circle enjoying our unexpected snack. Take note of the fellow's hat. He was sensible, and the rest of us without hats or sunblock were sunburned at the end of the day.

We encountered many awesome plants, most of which I will not cover in this blog post. Suffice it to say that I would much rather go on a nature walk than watch tv, go to a pub, or even play badminton. Nature is incredible! Some plants of note:

This is one of New Zealand's edible berries. There are few fruits in New Zealand that are poisonous, one of them being the fruit of the Karaka tree (a very common and pleasant-smelling tree on Massey's campus). These berries didn't taste too sweet, but had a delightful and subtle aftertaste.

This little wetland plant is only found in one small wetland on the scientific reserve, and isn't found in many other locations in New Zealand. It is endemic to New Zealand. The only reason it's found in this particular wetland is because it was planted there as part of a study. It has gone locally extinct in the other locations.

After we crested a final dune, we were at the beautiful beach, where waves were crashing onto the sand and the wind blew sand in our eyes. 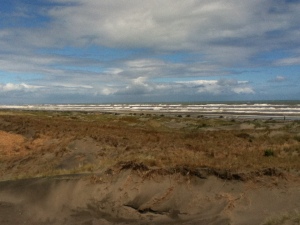 There was a small diversity of shells on this beach, and from what I hear, other beaches have a better variety. Still, I was amazed by those that were present, because the shells of Michigan are limited to mussels (both native and exotic) and a few snail shells, from what I have seen. 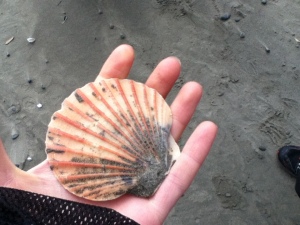 There was also some kelp and a great deal of driftwood, much of the driftwood was leftover from logging. 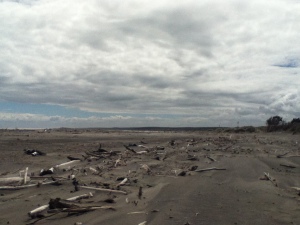 Here’s an aerial picture of the reserve, but keep in mind that the reserve has changed since the photo was taken. The river has moved and some plants have colonized in different areas.

Some of the issues of this area are the recreational vehicles that tear up the vegetation, horse dung that brings in weedy seeds, and the pine plantation that prevents the dunes from acting as they usually would. The Department of Conservation has its hands full when trying to figure out how to manage these dunes, since there are so many parties with very different interests. Locals insist that they have the right to ride their vehicles over the dunes. People who reside nearby are worried about their houses and property becoming covered with sand. Naturalists are concerned about the rare plants that grow only in the special wetlands, and naturalists are also irritated by the non-native species that are currently colonizing.

The day ended with Jill making a final stop at a honey shop on the way back. She bought everyone honey ice cream. The flavors ranged from chocolate and honey to Bailey’s and honey to passionfruit and honey to manuka honey. I made the mistake of asking for samples, and was playfully ridiculed by the store owner. Apparently free samples are not common in New Zealand. He let me try quite a few after all, and I chose rum raisin and honey and ginger and honey. It was a perfect end to an excellent field trip.

Sometimes you just have to forget the fact that lactose intolerance will be a problem ex post facto, because ice cream this good is worth any problematic bodily function. Apparently, it was pretty sub-par ice cream for New Zealand, but I think it was the best I've ever tasted.

2 responses to “A Day at the Beach”